111 Places in the Bronx That You Must Not Miss (Paperback) 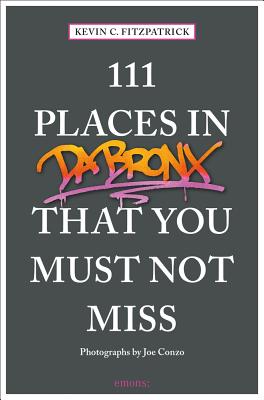 - The ultimate insider's guide to the Bronx- Features interesting and unusual places not found in traditional travel guides- Part of the international 111 Places/111 Shops series with over 250 titles and 1.5 million copies in print worldwide- Appeals to both the local market (more than 20 million people call New York City home) and the tourist market (more than 60.5 million people visit New York City every year )- Fully illustrated with 111 full-page color photographsNew York City's borough of the Bronx draws millions of people annually to visit the largest zoological park in the United States, or to catch a baseball game at Yankee Stadium. Beyond the animal cages (and batting cages) is a section of the city filled with art, food, music, and unusual sites that can only be found in one place: Da Bronx. The Bronx offers some of the most amazing experiences for visitors to New York City because it is so unexplored. You can take a canoe down a river, or take a course in pole dancing school. The Bronx has a rich history, which includes the American Revolution, that has given way to today's rebels in street fashion. Sit down and feast on dishes from Ghana and Italy. Learn to roll cigars. Pay homage to the founders of rap music and hip hop culture. And explore quiet cemeteries' stunning architecture. The borough is home the largest park in New York City, waterfront vistas that are unparalleled, and access to riverfronts and bays. Whether you are a first-time visitor, longtime resident, or a native, you will find 111 hidden gems in the Bronx. The most unexplored borough of New York City is yours to discover with 111 Places in the Bronx That You Must Not Miss.

Kevin C. Fitzpatrick is a third-generation New Yorker with a voracious enthusiasm for all things related to the city's past, present, and future. He is the author and editor of seven books, all tied to New York City history. His most recent is World War I New York, A Guide to the City's Enduring Ties to the Great War. It won the Apple Award for best nonfiction book about New York from the Guides Association of NYC. He has also written guides to Governors Island, Jazz Age Manhattan, and literary landmarks. For 20 years he's been leading walking tours and is a licensed NYC sightseeing guide. He gives tours of places as diverse as Woodlawn Cemetery and the Statue of Liberty, which he has climbed more than 200 times. In his spare time Kevin and his friend own a vintage FDNY fire engine that they are restoring. Kevin lives on the Upper West Side of Manhattan with his family.New York native Joe Conzo Jr. is known as "The Man Who Took Hip Hop's Baby Pictures." Born and raised in the Bronx, Joe Conzo Jr. acquired a passion for photography as a young boy attending the Agnes Russell School on the campus of Columbia University. He continued his formal artistic education at the School of Visual Arts (NYC). He has photographed all the greats of Hip Hop, and his images appear in the seminal book, Born in the Bronx: A Visual Record of the Early Days of Hip Hop. His entire collection will reside in the permanent Hip Hop archive at Cornell University. Joe continues to lecture, meet with young people, exhibit his work, and participate in international events.